5 A wise man will hear, and will increase learning; and a man of understanding shall attain unto wise counsels:

6 To understand a proverb, and the interpretation; the words of the wise, and their dark sayings.

7 The fear of the Lord is the beginning of knowledge: but fools despise wisdom and instruction.

Be not wise in thine own eyes: fear the Lord, and depart from evil.

The wise shall inherit glory: but shame shall be the promotion of fools.

Go to the ant, thou sluggard; consider her ways, and be wise:

Hear instruction, and be wise, and refuse it not.

The proverbs of Solomon. A wise son maketh a glad father: but a foolish son is the heaviness of his mother.

The wise in heart will receive commandments: but a prating fool shall fall.

Wise men lay up knowledge: but the mouth of the foolish is near destruction.

29 He that troubleth his own house shall inherit the wind: and the fool shall be servant to the wise of heart.

30 The fruit of the righteous is a tree of life; and he that winneth souls is wise.

The way of a fool is right in his own eyes: but he that hearkeneth unto counsel is wise.

A wise son heareth his father's instruction: but a scorner heareth not rebuke.

The law of the wise is a fountain of life, to depart from the snares of death.

He that walketh with wise men shall be wise: but a companion of fools shall be destroyed.

Every wise woman buildeth her house: but the foolish plucketh it down with her hands.

In the mouth of the foolish is a rod of pride: but the lips of the wise shall preserve them.

A wise man feareth, and departeth from evil: but the fool rageth, and is confident.

The crown of the wise is their riches: but the foolishness of fools is folly.

The king's favour is toward a wise servant: but his wrath is against him that causeth shame.

The tongue of the wise useth knowledge aright: but the mouth of fools poureth out foolishness.

The lips of the wise disperse knowledge: but the heart of the foolish doeth not so.

A scorner loveth not one that reproveth him: neither will he go unto the wise.

A wise son maketh a glad father: but a foolish man despiseth his mother.

The way of life is above to the wise, that he may depart from hell beneath.

The ear that heareth the reproof of life abideth among the wise.

The wrath of a king is as messengers of death: but a wise man will pacify it.

20 He that handleth a matter wisely shall find good: and whoso trusteth in the Lord, happy is he.

21 The wise in heart shall be called prudent: and the sweetness of the lips increaseth learning.

The heart of the wise teacheth his mouth, and addeth learning to his lips.

A reproof entereth more into a wise man than an hundred stripes into a fool.

Hear counsel, and receive instruction, that thou mayest be wise in thy latter end.

Wine is a mocker, strong drink is raging: and whosoever is deceived thereby is not wise.

11 When the scorner is punished, the simple is made wise: and when the wise is instructed, he receiveth knowledge.

12 The righteous man wisely considereth the house of the wicked: but God overthroweth the wicked for their wickedness.

There is treasure to be desired and oil in the dwelling of the wise; but a foolish man spendeth it up.

Bow down thine ear, and hear the words of the wise, and apply thine heart unto my knowledge.

Hear thou, my son, and be wise, and guide thine heart in the way.

The father of the righteous shall greatly rejoice: and he that begetteth a wise child shall have joy of him.

5 A wise man is strong; yea, a man of knowledge increaseth strength.

6 For by wise counsel thou shalt make thy war: and in multitude of counsellors there is safety.

These things also belong to the wise. It is not good to have respect of persons in judgment.

As an earring of gold, and an ornament of fine gold, so is a wise reprover upon an obedient ear.

My son, be wise, and make my heart glad, that I may answer him that reproacheth me.

Whoso keepeth the law is a wise son: but he that is a companion of riotous men shameth his father.

The rich man is wise in his own conceit; but the poor that hath understanding searcheth him out.

He that trusteth in his own heart is a fool: but whoso walketh wisely, he shall be delivered.

8 Scornful men bring a city into a snare: but wise men turn away wrath.

9 If a wise man contendeth with a foolish man, whether he rage or laugh, there is no rest.

A fool uttereth all his mind: but a wise man keepeth it in till afterwards.

The words of a wise man's mouth are gracious; but the lips of a fool will swallow up himself.

And I have filled him with the spirit of God, in wisdom, and in understanding, and in knowledge, and in all manner of workmanship,

15 So, as much as in me is, I am ready to preach the gospel to you that are at Rome also.

16 For I am not ashamed of the gospel of Christ: for it is the power of God unto salvation to every one that believeth; to the Jew first, and also to the Greek.

17 For therein is the righteousness of God revealed from faith to faith: as it is written, The just shall live by faith.

19 Because that which may be known of God is manifest in them; for God hath shewed it unto them.

20 For the invisible things of him from the creation of the world are clearly seen, being understood by the things that are made, even his eternal power and Godhead; so that they are without excuse:

21 Because that, when they knew God, they glorified him not as God, neither were thankful; but became vain in their imaginations, and their foolish heart was darkened.

22 Professing themselves to be wise, they became fools,

23 And changed the glory of the uncorruptible God into an image made like to corruptible man, and to birds, and fourfooted beasts, and creeping things.

24 Wherefore God also gave them up to uncleanness through the lusts of their own hearts, to dishonour their own bodies between themselves:

25 Who changed the truth of God into a lie, and worshipped and served the creature more than the Creator, who is blessed for ever. Amen.

26 For this cause God gave them up unto vile affections: for even their women did change the natural use into that which is against nature:

27 And likewise also the men, leaving the natural use of the woman, burned in their lust one toward another; men with men working that which is unseemly, and receiving in themselves that recompence of their error which was meet.

28 And even as they did not like to retain God in their knowledge, God gave them over to a reprobate mind, to do those things which are not convenient;

32 Who knowing the judgment of God, that they which commit such things are worthy of death, not only do the same, but have pleasure in them that do them.

14 If my people, which are called by my name, shall humble themselves, and pray, and seek my face, and turn from their wicked ways; then will I hear from heaven, and will forgive their sin, and will heal their land. 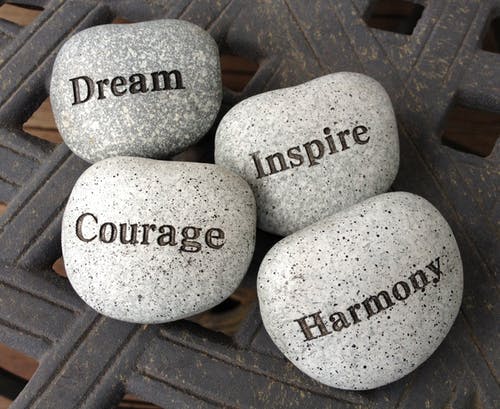 Give a man a fish and he will eat for a day.

Teach a man  how to fish and he will eat for a lifetime.

10 For the love of money is the root of all evil: which while some coveted after, they have erred from the faith, and pierced themselves through with many sorrows.

11 But thou, O man of God, flee these things; and follow after righteousness, godliness, faith, love, patience, meekness.

12 Fight the good fight of faith, lay hold on eternal life, whereunto thou art also called, and hast professed a good profession before many witnesses.